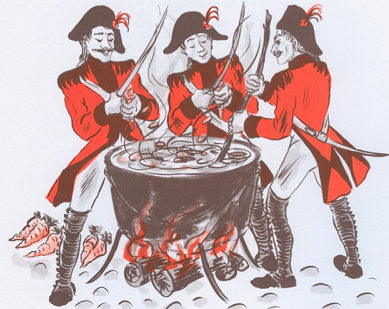 The children’s fable of the making of stone soup is one well known to all: two hungry wanderers arrive in a poor village with empty bellies and no money. The village is destitute with not a scrap of food to share. The wanderers quietly set about boiling a pot of water into which they place a single large stone. Out of curiosity, villagers ask them what they are doing and they explain that, if only they had a couple of onions, they would be feasting on stone soup… You know the rest of the story where the wanderers end up feeding themselves and the whole village.

I have had the pleasure of working in Auburn, NY recently and found that the story of the stone soup is a somewhat apt analogy to describe an economic development phenomenon taking place there now. It provides a wonderful example of how transformation can come from unlikely sources and is a potential model to replicate in other cities and towns across the country.

The Background: Auburn is a small city located southwest of Syracuse in Upstate New York’s Finger Lakes Region. Its population peaked in the 1950’s at about 37,000 and has declined gradually ever since to about 27,000 today. Not surprisingly, Auburn’s downtown suffered commensurately during this population drawdown, with its beautiful building stock afflicted by low rents, vacancies and discouraging new investment. All the while, a growing arts-and-culture community has blossomed in the city, with multiple performance venues and retail stores. One of the premier organizations is the Musical Theatre Festival, which produces musicals primarily in the summer months that attract visitors from as far away as 50-100 miles from Auburn.

In 2008, the Musical Theatre Festival commissioned a report to explore how to dramatically expand its activities to achieve a much higher profile across the state and nation as a premier destination for musical theater. It was an extremely ambitious plan to take its schedule from an 11-week summer run to an April through October season while expanding performance space to five venues. Of those five venues, the crown jewel was to be a large, custom-built theater complex. To achieve this vision, the plan called for a fundraising campaign with a goal of raising over $10 million in operating, capital and endowment funds. In the context of the City’s population of 27,000, this equates to almost $400 per man, woman and child in the City – a truly ambitious goal! The study concluded by saying that, if the vision were fully realized, the Music Theater Festival (MTF) could bring as many as 437 jobs to Auburn along with almost $30 million in annual economic output.

Despite these truly ambitious goals, the MTF was successful at raising significant funds over time and began to slowly build attendance levels, artist quality and the number of shows and visitors to Auburn. Furthermore, the MTF narrowed down its search for the crown jewel theater complex to a specific location in the heart of downtown on an empty lot.

What Happened? Once the site for the new theater complex had been definitively established as being in the heart of downtown, a major shift in attitudes occurred in the development community of Auburn. Rather than viewing the downtown as a no-win area of the city, developers reexamined the opportunity set. Recall that the downtown experienced a multi-decade decline in quality and occupancy, leading to very low market clearing prices for real estate.

What ended up happening was that developers began purchasing entire buildings at essentially very low cost, bets that would pay out if and when the MTF dreams were realized. The purchasing efforts fed upon themselves, especially in light of the continued fundraising success and operational success of MTF as well as the joint successes of the Auburn Public Theater, Theater Mack and the Cayuga Museum. In a relatively short span of time, new restaurants opened, new bars, second story conversions to high-end apartments happened and even a couple of significant mill building loft conversions.

As momentum continued to build, more good things happened, including some reinvestment by the City into pocket parks and other beautification efforts. A total of about 12 new eateries are now open in the downtown, including some high-end dining options and a brewery that has made the downtown a dining and entertainment destination for the entire area. Likewise, many new art and culture boutiques have located downtown. And, as a sign of the downtown’s renewed vigor, the first new-build office building was constructed in the downtown, a first in Auburn’s downtown in quite some time. Relatively affluent residents are now moving back into downtown into upper story luxury apartments while new units continue to come on to the market.

But What About the MTF’s New Theater Complex? Well, for now, the new theater complex is still only a concept. The original site chosen for the complex was promptly mired in a never-ending series of lawsuits against the City from an adjacent owner (not coincidentally, a law firm). The City and MTF have all but ceased moving forward on the MTF complex at that site due to those legal actions. While the MTF theater complex may still one day move forward, it is uncertain if, when, and where it will occur.

Nevertheless, the resurgence of downtown is now well underway despite the absence of the MTF complex. There is enough momentum happening that it should be self-sustaining at this point. In effect, the downtown no longer needs the catalyst that everyone thought it needed, simply because the development community reexamined the opportunities and created a virtuous self-sustaining cycle. Like the stone soup fable, the villagers added enough of their own resources to the pot to make a wonderful soup to feed the entire community.

What Does This Mean for Other Communities? The Auburn experience could be instructional for other communities seeking to promote downtown revitalization. The “lessons learned” appear to be:

With these principles and a little luck, you can find your own “phantom catalyst” and make your own stone soup. Good luck.