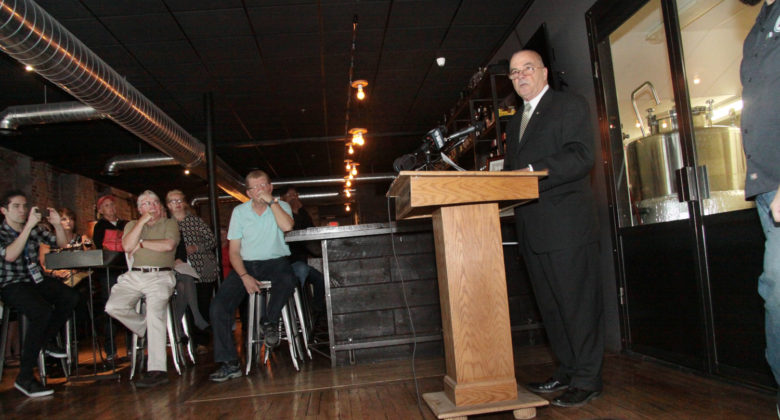 Auburn, NY – As part of the City of Auburn’s Downtown Revitalization Initiative, the city has proposed development of a Riverside Regional Public Market along the banks of the Owasco River in the heart of downtown.  The Public Market will provide a new home for the Auburn Farmer’s Market, feature a Finger Lakes culinary center and demonstration kitchen, and partner with existing organizations to develop new and existing agri-tourism initiatives and products.

“We are here today to announce that the Prison City Brewery will invest in a new production facility and tasting room that we believe can be designed and incorporated into the Riverside Regional Public Market.  This will provide a permanent anchor tenant to the Market that will allow it to become a public/private partnership venture, assuring sustainability and allowing the market to become the year-round facility we envision it to become,” stated Mayor Quill.

Prison City Pub & Brewery co-founders Dawn & Marc Schulz planned for expansion in five years but say due to heavy demand for their product and the City of Auburn’s Downtown Revitalization Initiative plans, “the time is right” to invest and expand now.  “We love this community that our three children are growing up in and are proud to be a part of Downtown Auburn’s continued growth,” said Dawn Schulz.

For more information, read today’s article in The Citizen newspaper.