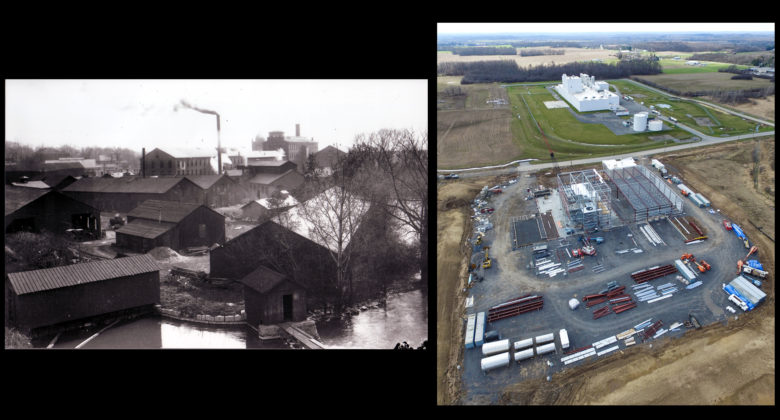 (At right) Photo courtesy of the Cayuga Museum collection:  The Washington Street industrial area, c. 1900.  The Lehigh Valley freight house is visible in the distance.  The Owasco River, in the foreground, attracted industrial development at Auburn’s founding and throughout the 19th and early 20th centuries.

(At left) Photo by Benjamin Walter.  This 2016 aerial view shows the construction of Grober Nutrition, at bottom, and the completed Cayuga Milk Ingredients, at top, milk processing facilities located on Eagle Drive in the Cayuga County Industrial Development Agency Park in Aurelius.

Cayuga County’s industrial past is full of stories of invention, change and reinvention.

Hailing from here were adventurous entrepreneurs like Edwin B. Morgan, the first president of Wells Fargo; D.M. Osborne, founder of the Osborne Agricultural Co., which was sold to International Harvester in 1903; and Willard Legrand Bundy, inventor of a clock that would become the predecessor to the IBM computer. The city of Auburn was first settled by an ambitious self-starter and veteran of the Revolutionary War, Col. John Hardenbergh. Hardenbergh was lured by the rapids and falls of the Owasco River, and in 1825 his son, John H. Hardenbergh, constructed a mill along the river at the base of the Genesee Street hill in what would become the heart of Auburn’s industrial developments later in the 19th and early 20th century.

The large brick factories seen in old black-and-white photos sprawling over the cityscape stretched beyond the river as new technologies made power and transportation more available and efficient to manufacturers based farther from the river. Many local industries utilized an ample albeit controversial prisoner workforce to operate equipment and manufacture goods like agricultural machinery, textiles, shoes and buttons to then be exported all over the world.

Women from surrounding rural areas and immigrants also made up much of the workforce. Both segments were attracted to the bounty of employment opportunities provided by the thriving companies. Railcars provided easy transportation to shops, entertainment and parks throughout the county for the growing populace.

As time went on, a combination of foreign competition and the waning agricultural and locomotive industries, along with many other factors, led to the change in industrial growth in our region and many others throughout the country. The county had to change with the times. Over the decades, the economy transformed to become more diversified moving away from an industrial manufacturing economy in favor of a more balanced economy, including agriculture and tourism along with the heritage manufacturing industry. This new economy continues to define Cayuga County today.

As a cornerstone of the economic development segment of our community, the Cayuga Economic Development Agency has the responsibility to move the county toward its economic goals by retaining jobs, helping current businesses expand and attracting new business to bring a sustainable quality of life for its residents. Assisting in re-establishing Cayuga County’s heritage as a progressive industrial community is one way in which CEDA works to accomplish this.

With CEDA’s assistance, the Aurora Shoe Co. received an Empire State Development grant through the CNY Regional Economic Development Council to help finance the expansion of its manufacturing facility in Ledyard. CEDA’s partner organizations the Cayuga County Industrial Development Agency and Auburn Industrial Development Authority have assisted numerous businesses in this heritage industry to expand as well, including A1 Pumping, All Ways Concrete, Currier Plastics, D&W Diesel, Johnston Paper and Mack Studios. An example of CEDA’s new business attraction efforts include Grober Nutrition, which with CEDA’s help was awarded ESD funding and incentives through CCIDA to help in the construction and commission of a new dairy powder drying facility in the town of Aurelius.

The above-mentioned developments are a sample of CEDA’s recent collaborations and combined are expected to add over 90 new jobs to Cayuga County. Beyond these examples, CEDA’s business development specialist also meets with dozens of entrepreneurs annually, connecting them with SCORE mentors for free and confidential mentoring, as well as local attorneys, accountants, financial institutions, real estate opportunities and graphic designers to help them launch their businesses.

Col. Hardenbergh, an entrepreneur himself, has been described as an ally of pioneers and was perhaps one of the first proponents for growth in Cayuga County. It is this spirit of entrepreneurship and economic vitality that will be celebrated in the “Timeless Cayuga” theme of the upcoming Cayuga County Chamber of Commerce’s 107th annual dinner at the Emerson Park Pavilion Wednesday, Oct. 26. During the event, the chamber will look back at a few of the county’s historic and heritage industries and celebrate the momentum we are seeing now and into the future. We are looking forward to this event and hope to see you there. Contact the chamber at (315) 252-7291 or email admin@cayugacountychamber.com to register.

Originally published in the September 29, 2016, edition of The Citizen.