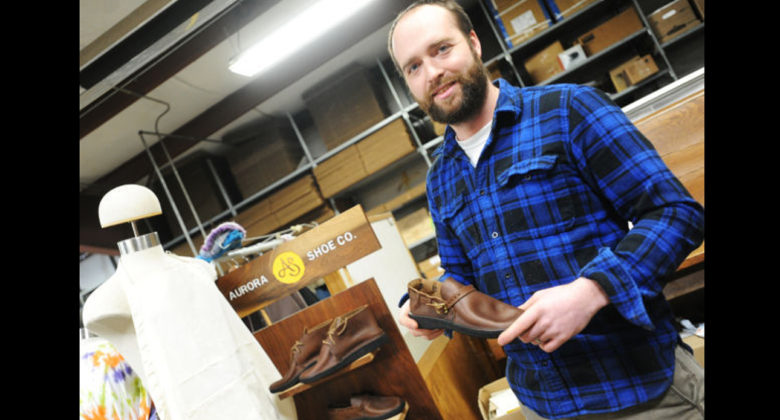 David Binns is the owner and president of Aurora Shoe Co. in Ledyard, NY.  Photo provided by The Citizen.

As the Cayuga Economic Development Agency’s (CEDA) Economic Development Specialist, my role is to retain Cayuga County’s existing businesses and help them expand.  In my position over the last three years I have had the pleasure of working with a myriad of businesses of all sizes and capabilities.  In our column this month, however, I wanted to give an example of how CEDA interacts with a small business in Cayuga County and how we are able to find solutions to help that business grow.

The following log describes this kind of interaction.  It begins with the first interaction between CEDA and Aurora Shoe Co. owner David Binns and ends with the present-day construction of their expansion project.  Aurora Shoe Co. employs 7 people who manufacture leather shoes and leather products at the 5,000 s.f. facility south of the Village of Aurora:

Bruce Sherman met with David Binns for CEDA’s first business visitation outreach.  Mr. Binns purchased the company in 2010 from the founder (who is still an employee) and has subsequently grown the business with additional marketing and overseas sales distribution.  Mr. Binns indicated that he is running out of room at his current facility and will likely expand in the next year or two (2015-2016).

Bruce Sherman and David Binns remained in touch throughout 2014 and the spring of 2015.  Based on information Bruce provided to Mr. Binns regarding the 2015 round of the NYS Consolidated Funding Application (CFA), Mr. Binns expressed interest in moving forward with a physical expansion of his building and subsequent equipment purchase.

Bruce and CEDA staff assisted Mr. Binns with writing the CFA, applying for an Empire State Development (ESD) grant.  The application was submitted in late July 2015, requesting grant assistance for the $425K expansion project to double the size of their manufacturing space (5,000 s.f.), which will lead to 3-5 additional manufacturing employees.

Bruce Sherman introduced David Binns to Steven King of the CNYIBA, an export expert who assists CNY businesses with increasing and/or starting exporting.  Aurora Shoe Co. exports 70% of their product, and a meeting with Steven King of the CNYIBA helped Mr. Binns formulate an export plan.  Mr. King also introduced Mr. Binns to John Tracy an International Trade Specialist with the US Department of Commerce.

In December 2015, Empire State Development (ESD) awarded Aurora Shoe Co.  a $50K grant for their expansion project.  CEDA staff assisted David Binns with navigating through the ESD contract and negotiating the final terms of agreement for the grant award.  Bruce Sherman and Tracy Verrier met with Mr. Binns in late April 2016 to review the final contract.  The grant award contract was finalized in May 2016.

CEDA staff assisted David Binns with the application to the CCIDA for Sale & Use Tax incentives on construction materials and equipment purchases for his $500K expansion.  The CCIDA approved Mr. Binns’s incentive at their June 21st meeting.  Mr. Binns closed on the CCIDA paperwork on July 14, 2016.

Aurora Shoe Co. is currently under construction for their expansion project and is anticipating completion in spring 2017.

Utilizing incentives for businesses to expand at the local, state, and federal level, my job is to help businesses navigate those waters to help our county grow.  If your business needs help with retention or expansion, contact me for assistance.

CEDA’s 2017 Economic Forecast Luncheon is Thursday, January 26, 11:30 a.m. to 1:30 p.m. at Hilton Garden Inn in Auburn.  Chad Moutray, chief economist for the National Association of Manufacturers, is our keynote, and he will be discussing the economic outlook for manufacturing in the state, national, and global economies.  This year’s luncheon will be a special opportunity for our local manufacturers to learn from an industry expert about potential challenges and opportunities.  As we are beginning a new year and a new administration, Chad has valuable insight into possible policy changes that could affect businesses on a global and local level.  If time allows, guests will be welcomed to ask questions of our keynote speaker.  Register online by following the link on CEDA’s homepage, cayugaeda.org.

Bruce Sherman is an Economic Development Specialist at CEDA. (315) 252-3500 or bsherman@cayugaeda.org.

Published in the January 19, 2017 edition of The Citizen.