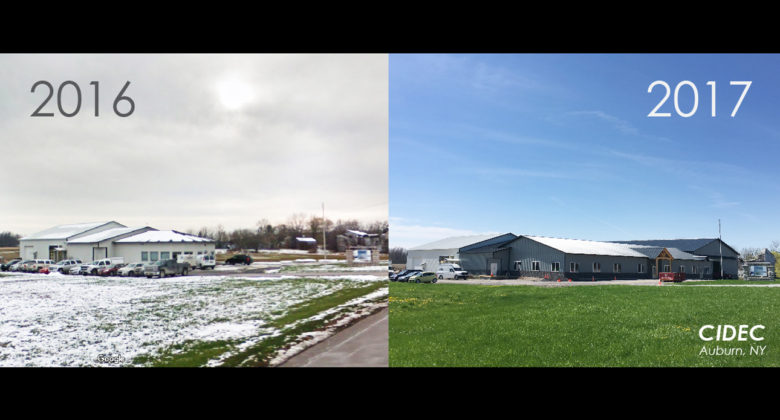 As mentioned in my last column in March, the New York State budget has produced another round of funding of the Consolidated Funding Applications (CFAs) to incentivize private investment through the Regional Economic Development Councils (REDCs).  The most common, ESD grant, has the ability to incentivize a business investment by offering a grant, typically 10-20% of a total project cost, which is reimbursed to the company at the completion of the project and the job creation figures are met.

One fantastic success story of ESD funding in last year’s REDC round was for CIDEC, LLC.  For those of you who may not know, CIDEC is a small, local, family-owned business on Routes 5 & 20 in Aurelius, across the street from D&W Diesel.  They are in the dairy business, selling, distributing, installing, servicing, and manufacturing equipment for dairy farms throughout Upstate New York.  Opening in 1996, CIDEC has grown under the guidance of Chris and Kimberly Cherry into the region’s premier dairy equipment provider, not to mention a growing source of local employment.

I became engaged with CIDEC shortly after starting my role at the Cayuga Economic Development Agency (CEDA) in April 2014, specifically after learning of CIDEC’s businesses expansion when they purchased a competitor in Batavia, NY.  After meeting with Chris and Kimberly Cherry, CEDA was able to learn more about CIDEC’s business and future needs, which ultimately led to their exciting new expansion occurring today!

At the time of our first meeting, CIDEC employed 35 of your neighbors and friends, with jobs ranging from warehouse workers to technicians and programmers, along with outside salespersons.  In spring of 2014, they were clearly growing out of their longtime location in Aurelius, even with the expansion to a second location in Batavia.  We remained in touch throughout 2014 and 2015, discussing business needs, including expansion plans that included a possible new location within Cayuga County or adding onto their existing facility.

In early 2016, discussions surrounding the Cherry’s pulling the trigger on their expansion project formalized.  Based off of information provided to the Cherrys by CEDA regarding the 2016 round of the NYS Consolidated Funding Application (CFA), Chris and Kimberly expressed interest in moving forward with a physical expansion of their building and subsequent equipment purchases.

CEDA staff assisted CIDEC with finalizing the CFA and applying for an Empire State Development (ESD) grant.  The application was submitted in August 2016, requesting grant assistance for the $1.2M expansion project to add 15,000 s.f. on their facility for additional warehousing, office and training space, and room for light manufacturing, which will lead to 7 additional employees.  ESD announced in December 2016 that CIDEC, LLC, was awarded a $240K grant for their expansion project.

After the award was announced, CEDA staff assisted CIDEC with application to the CCIDA for Sales & Use Tax incentives for their $1.2M expansion.  The CCIDA approved the Cherry’s incentive at their January 2017 meeting and construction began!

Our role at CEDA, is to assist you with the technical side of the CFA process and help guide your business through any other local, state, or federal assistance that is available.  These services are available to your organization at little to no cost.  Any business consultation is free and confidential.  Contact me today to talk about your business and perhaps any opportunities that may be available to access these incentives.

Bruce Sherman is an Economic Development Specialist at CEDA.  Contact him by calling (315) 252-7291 or email bsherman@cayugaeda.org