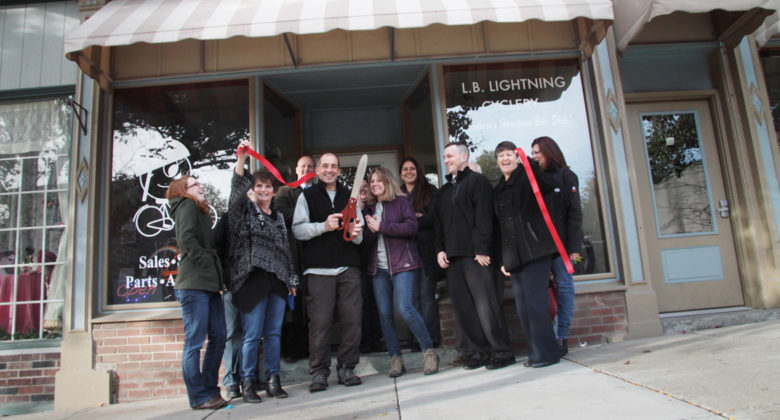 Photo caption:  The Cayuga County Chamber of Commerce celebrates the grand opening of L.B. Lightning Cyclery with a ribbon cutting ceremony in October 2016.

The Cayuga County Chamber of Commerce’s 108th Annual Dinner is coming up on October 18, and this year’s theme is Celebrate Cayuga! It seems to be an appropriate year for this theme as there have been so many wonderful things to celebrate in our community, including within the business community. It’s not possible to fit them all within this article, but here is a sampling of some of the fantastic things we’ve been lucky enough to celebrate over the last year:

A number of Cayuga County businesses and organizations have also received various accolades and recognitions in the last year.

We also fondly remember this year’s Chamber Awards Luncheon, which recognized seven organizations and individuals for excellent community leadership. Susan Riordan was named this year’s Phyllis Goldman Award recipient, which recognizes a woman business owner who has demonstrated a noteworthy entrepreneurial pursuit. The Terri Bridenbecker Young Professional Award was presented to Katy Vitale of Crème della Crème Copywriting & Communication, while the Community Leadership Award was presented to Jenny Haines from the City of Auburn Office of Planning and Economic Development. Seymour Library took home the Non-Profit of the Year Award, while the Small Business Awards went to Prison City Pub & Brewery (again with the winning) and COAST Physical Therapy. Finally, Buffalo Wild Wings received the Business Leader Award. We continue to celebrate these community leaders and look forward to celebrating a new cohort next spring!

There are also many milestones to be proud of, including:

There are so many things to celebrate in Cayuga County. To list just these doesn’t do our community justice. From the festivals to the talented artists and musicians, we have so many things to offer. So come Celebrate Cayuga with us on October 18th at the Emerson Park Pavilion. Please register by October 11. Registration is available online at cayugacountychamber.com.

Tracy Verrier is the executive director of the Cayuga Economic Development Agency and Cayuga County Chamber of Commerce.

Published in the September 28, 2017, edition of The Citizen.